Still Sailing After All These Years

Octogenarian John Garau is standing on the deck of his sailboat home in Dana Point, California. His boat, an Ericson 27 that he bought way back in 1978, is in pristine condition, still looking almost new despite the countless nautical miles logged.

"I had a nice, big house in Laguna Beach and this boat here in the harbor that I sailed mostly on weekends. A few years back I decided I didn’t need a big house to knock around in any longer, so I sold the house and moved aboard. It was a good decision. Being around boats keeps me outdoors and young ... well, youngish anyway."

Being a live-aboard, John has become the self-appointed, and widely appreciated, one man security force of this particular dock, keeping a watchful eye on his neighbor’s vessels when the owners are not around. After a lifetime of tramping his way all over the world, most of it via sailboats, it only seems natural that he continues to live out his life right here on the water. 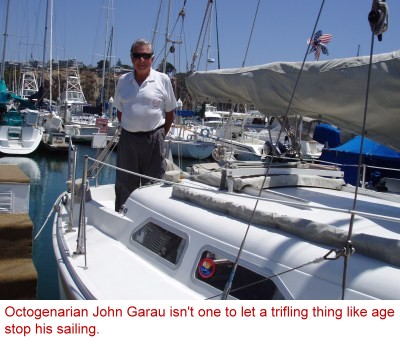 "I grew up around the water, in Laguna Beach," he tells me. "I was a surfer long before the sport became California iconic. I was a lifeguard in Laguna for many years before the war (WW II). I guarded at Avalon (at Santa Catalina Island) after the war for a spell, too. That was back when the great old Hollywood stars would sail their boats out to the island. I knew them all: Errol Flynn aboard his sailboat Sirocco, John Wayne (who had both a power boat and a sailboat, depending upon his mood), Ward Bond and so many others. But it was a classmate of mine back in school who actually introduced me to the sport of sailing. He had a rich daddy who owned a boat – a Rhodes 33 – and crewing on that boat was my first taste of ocean sailing."

Serving as a navigator in the U.S. Army Air Corp during World War II, John learned the skills that would allow him to become a licensed commercial pilot and an excellent blue water sailor. He’s sailed across the Atlantic, raced in the Transpac, sailed a trimaran to Tahiti, cruised the Caribbean Islands and on to Venezuela and Jamaica, Bermuda to Azores, over to Portugal and Spain (then spent 2 years cruising in a VW camper around Europe), cruised New Zealand, spent a year in Australia, sailed to Fiji ... there are few places on the globe where water and land meet that John has not visited.

In the autumn of 1988, already well into his sixties, John signed on as "navigator, cook, and chief bottle washer" aboard a 48' custom C&C racing sloop that sailed from Newport Beach, California to Panama, the Carribean, and on to Europe. "I think one of the wildest rides of my life was on that voyage," he told me. "I remember we were at the north point of Golfo de Tehuantepec in Oaxaca, Mexico, one of the windiest places on earth; windy at least 300 days per year, sometimes 50 to 80 or even 100 knots. We waited a few days for the winds to ease, but they never really did. So, we took off after midnight when the winds were comparatively less, sailing along the coast on the 5 fathom line. Huge waves don’t really have a chance to build there, but you might get sandblasted because you’re sailing really close to shore." John continued telling me about near calamities and some great friendships made along the way on that trip ... then moved on to tales of other voyages, all of them spellbinding and fascinating. I encouraged John to write a book, because there are not enough pages in a single issue of SAIL to handle all the exciting stories he has to tell.

Among John’s favorite cruising spots is Hawaii, where he lived for several years, and can still often be found relaxing at the Hawaii Yacht Club. "I love the Hawaiian culture and people," he says. "One of my good friends was Prince Edward Kawananakoa, a rightful heir to the monarchy in Hawaii, if it were still to exist." In 1997, Kawananakoa died. John attended his funeral. Two years later he began dating the widow of his deceased friend, "Because she’s a great lady and, with Edward gone, she needed looking after." Together they cruised the Gambier Islands, Tuomotus, Easter Island, Cook Islands, Indonesia, and China ... all that while John was in his 70s.

"I felt extremely fit and youthful, until I hit my 80s," he says, shrugging his still broad shoulders and chuckling aloud. "Now it seems like each day without some sort of ailment is a gift." That may be, but John can still be seen sailing out beyond the breakwater, boat heeling nicely into the wind, and looking rather ailment free with a distinctly appreciative smile on his salt-weathered face. To paraphrase an old Paul Simon tune, John is still sailing after all these years!