All at once, our ranks are thinner. And the ranks of our icons: Farrah Fawcett, a leading-edge boomer, and Michael Jackson, on the other end of our generation. Mike Petrie writes this tribute about the passing of icons.

My wife, who is at the VERY youngest end of Boomerdom, had a Michael Jackson poster on her wall as a teen. Being a bit older, I had the famous 1970s poster of Farrah in the red one-piece bathing suit on my wall. Over twelve million of those Farrah posters were sold (mostly to males, I presume), so I was not alone. As Jill Munroe in the television series “Charlie’s Angels,” Farrah was THE beautiful, sexy, blond-haired girl to which all other girls of the era were compared. Girls, of course, knew this and emulated Farrah. Seems every girl I knew back then had a Farrah hairdo. 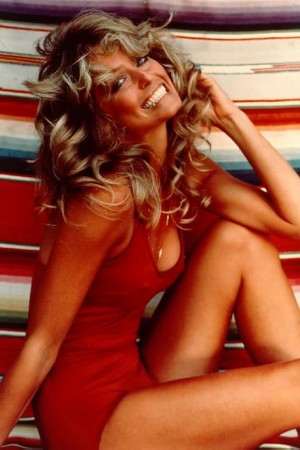 Michael Jackson, long before his fall from grace with legal and financial problems, and before he started getting downright weird, was truly the King of Pop. His Thriller album sold more than any other record in history, including anything by the Stones or Beatles.

When the icons of a generation pass away, whether it be George Harrison, John Lennon, Bob Marley, Jim Morrison, or whomever, bits and pieces of the generation they represent go with them. So it is with real sadness that I feel the vestiges of our generation slipping by. Farewell to Farrah, she is truly an angel now; not just playing one on TV. Farewell to Michael Jackson. Maybe he is now moonwalking in heaven. And, onward fellow Baby Boomers … taking one day at a time, wondering which of our beloved icons, reminders of our lost youth, might be next to remind us of our own mortality. But fret not. In the end, ya gotta admit … being a Boomer has been a really fun ride, hasn’t it? And there’s more road ahead of us.

Connie Julien says: June 26, 2009 at 9:37 am Nice piece Michael! A news tribute last night on MJ’s career, said that Thriller, being so MEGA successful, was a turning point for MJ. He had handled the limelight up until then quite well, but Thriller’s success was just too far over the top for any one person to survive….

Dave Sohigian says: June 26, 2009 at 3:47 pm I argued yesterday that Farrah and MJ were Gen X icons, not because they were born in the Gen X period (1961-1981) but because they so influenced Gen X’ers in our youth. It’s not that we are claiming them, they were clearly Boomers, it’s that they had an enormous effect on our worldview growing up.

Here’s the interesting thing: MJ and Farrah seem like Gen X cultural icons even though they were obviously much older than Gen X’ers. But the world at that time (70′s and 80′s) was very much about adult issues and the focus was not on children. There were few kids in entertainment that were playing to kids (and many of the kids were trying to show how grown up they were: for example, Tatum O’Neal). So we had to grasp onto adult icons like Farrah and MJ.

But times have changed and now with the Millennials (born 1982-200?) are the youth market, will Gen X’ers be their icons? I kinda doubt it. I think that Gen X’ers are running much of the media (and will do so much more in the future) but the Millennials seem to want their own as icons. It’s an interesting shift.

Michelle says: June 26, 2009 at 3:57 pm Well, I’m crying now. Thanks for choosing the best ever photo of Farrah and putting her first. I know Michael Jackson was a huge icon – but Farrah – I loved to watch her and try to make my hair look like hers and she did have the best smile. It was such a sad sad day. I would have liked to seen a bit more about her on the news – so I enjoyed your article. Thanks.

virgie says: June 27, 2009 at 11:22 am Farrah Fawcett was not only beautiful but truly courageous. We all admired her. Lots of us wanted to be her. Michael Jackson was a huge talent. This was a nice piece in tribute to both of them. I think the author summed it up perfectly. I enjoyed this. Thank you.

geoff says: June 28, 2009 at 6:05 pm Very nice tribute to 2 great boomer icons. farrah was gorgeous and MJ was really talented. but lets not forget Ed McMahon. He might have been old enough to be our father or grandfather, but boomers still cut their teeth watching the Tonight show. In that sense, good old Ed was a boomer icon too.

Mike Petrie says: June 30, 2009 at 1:06 am Good point about Ed McMahon. Since he died at age 86, I never really thought of him as any sort of Boomer icon … but it is not HIS generation that makes him a Boomer icon, it’s his effect on our generation. I agree with you. Thanks for reading, and thanks for your comment.

Lar says: June 30, 2009 at 12:40 pm I agree with the first comment above, “Well said, nuff said.” This boomercafe writer’s tribute was exactly the right amount of homage to pay to these passing icons. Thank you for keeping it short and sweet. Frankly, I’m completely burned out by the continuous and endless news coverage of Jackson’s death. Enough already!

Cindy L says: July 2, 2009 at 9:23 pm Thanks for this great tribute. Those posters of Farrah were everywhere in the dorms at Michigan State University when I was a college student. Of course, we gals were a little jealous of her, but admired her too! Who didn’t watch “Charlie’s Angels”?

Mike Petrie says: July 6, 2009 at 12:02 am Dave, Thanks for reading. I’m not at all surprised that MJ & Farrah might be considered Gen X icons as well as Boomer icons. They influenced a whole lotta people.

Though, I am quite surprised that you consider Gen Xers to include those born in 1961. Quite frankly, I’ve never heard anyone make that assertion before. Baby Boomer by definition means people born between 1946 and 1964. By your definition, both my sister AND my wife are somehow now of a generation different from my own. I’m sure they would find that pretty amusing, though I’m positive neither of them considers themselves to be a Gen Xer.

At any rate, thanks again for reading. Mike