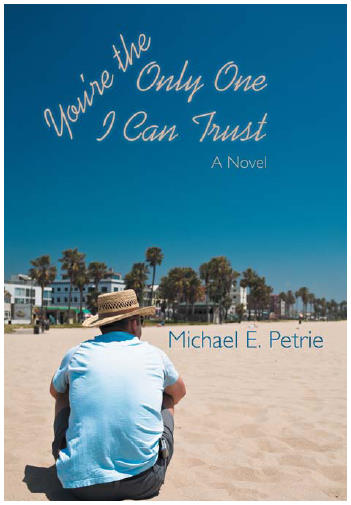 You're The Only One I Can Trust
by Michael E. Petrie

The glint of a gun barrel caught his eye – it was the second to last thing Griffin Gambil would ever see. There was a loud, percussive pop, a spume of red. In the time it takes to pull a trigger, the bullet smashes into his skull. Los Angeles real estate mogul Griffin Gambil spends the final seconds of his life watching his own blood spilling onto his Gucci loafers before collapsing in the driveway of his mistress’s house – the ink on his Last Will and Testament still wet.

Meanwhile, in another part of L.A., attorney Benjamin Harding – feeling jilted by the legal system – is turning his back on the practice of law after twenty years. Ben now looks forward to spending his days as a carefree sun worshiper and people watcher along one of Southern California’s most fascinating stretches of sand, Venice Beach.

Ben is just settling into his new life when he is contacted by the long lost love from his youth: newly widowed, Samantha Zimmer-Gambil. With the death of her rich husband only days before, Samantha asks Ben to handle the probate of the estate. Finding the woman of his dreams once again available, Ben reluctantly agrees to take on this one last legal case, what he assumes will be a simple probate matter, and win back his former heart throb. The case, however, quickly exceeds what he intended. Officially ruled as suicide, Samantha is certain her husband was murdered, enlisting Ben to go above and beyond the call of your average probate attorney in trying to discover who killed Griffin Gambil, her late husband.

Was it the mistress, to whom Griffin’s will left everything and who, Ben discovers, has a criminal record along with her penchant for bizarre sex play? Also, Griffin Gambil had a betrayed business partner, cheated out of a fortune by the deceased, with more than enough motive to do the deed. And why is Ben suddenly being terrorized by a dangerous looking thug with a warning to get out of the case?