I LOVE L.A., by Michael Petrie

My lovely wife and I went to the Hollywood Bowl one recent night with friends -- a two hour drive from our home -- with me grumbling much of the way about how much I hate going into Los Angeles! The traffic, the crowds . . . but an "evening at the Bowl" is one of the few things that makes the onerous drive worth it. An evening at the Bowl is perhaps our very favorite "L.A. thing" to do.

The Hollywood Bowl itself is an iconic L.A. landmark, recognizable worldwide. Arriving at the Bowl, you cannot escape the sense of history and enormous talent associated with this unique place in Los Angeles. Probably every major performer of the last fifty years has appeared, or dreamed of appearing, at this natural amphitheater etched into the Hollywood hillside. It is "old Hollywood," coexisting quite compatibly with modern Los Angeles. I've been coming here for more than thirty years, and have seen many of the big names all us Baby Boomers grew up with, from Donovan to Paul Simon, and classical performances by renowned orchestras, and jazz from greats like Ella Fitzgerald and Dizzy Gillespie. Just being at the Bowl on a beautiful warm Southern California evening still sends a rush of excitement through my bloodstream. 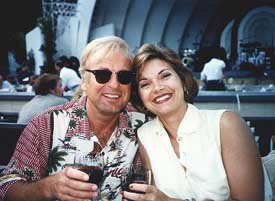 Taking our seats in a private box just a few rows from center stage (much better than the nose bleed seats I often occupied in younger more impecunious times), dinner was served complete with fine California wines. Breaking bread and sharing vino with good friends under the stars at the Hollywood Bowl is an absolute delight. And, speaking of stars, one of the more entertaining features of dinner at the Bowl is "star gazing," and I don't mean the celestial sort. At past dinners at the Bowl, we've been seated near celebs like Dustin Hoffman, Johnny Carson, jazz great Mel Torme, singer Anita Baker, and many others. I didn't need to look far to discover that this night was no exception. Not ten feet away was superstar Liza Minnelli and her producer husband David Gest. Is this a totally L.A. experience or what?!

This night in particular, the featured performer is Natalie Cole. Listening to her CDs on the long drive to the city, her voice sounding pure and clean, I was eager to see her live on stage. The lights dimmed, the orchestra began to play . . . and out onto the stage walked one of the most stunning and glamorous females I have ever seen! The audience was mesmerized before she even sang her first note. Wearing a curve hugging evening dress that shimmered in the stage lights, accented by flashes of light glinting off her bejeweled extremities, this ravishing fifty-two year old fellow Baby Boomer looked nothing less than amazing! And then. . . she burst into song. What a voice! Let me tell you, if she is representative of the Boomer generation, we are definitely not over the hill. Not yet. 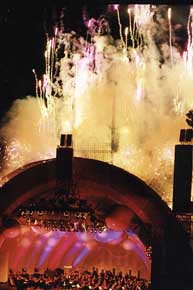 Cole sang, she danced, and wholly entertained a savvy Hollywood audience fully capable of distinguishing the wheat from the chaff. I looked over at Liza Minelli and she, too, was smiling and clapping along. Then, as if one such enormous talent on stage were not enough, a movie screen rolled down from somewhere above the stage and suddenly Natalie was singing duet with her father -- the late Nat King Cole. Incredible! Two hours flew by and Natalie Cole's performance seemed far too short.

Later, back in the car, wading through dense traffic trying to leave the enormous Hollywood Bowl parking lot, knowing we had a long drive ahead, I sighed heavily.

My wife looked over. "I know how you hate coming into L.A.," she said, "but tonight was fun, don't you think?"

"Fun?" I asked. "Natalie Cole, Liza Minnelli, the Hollywood Bowl, a great dinner with our friends. . . this was more than fun, this was spectacular! People who don't love L.A. just don't have a clue."

Life adventurer, attorney and writer Michael Petrie is a regular
contributor to BoomerCaf'e. He lives in California.