December, 2006: After weeks — make that months — of blue skies and temps in the 70s and 80s, winter officially arrived this month in Southern California as the skies grew cloudy, the wind began whistling through the palm trees, and liquid sunshine began falling from the heavens. My goodness, I not only had to raise the top on my 2-seater convertible but had to actually don a sweater to keep warm. Brrrr. The evening news lead story was ARCTIC STORM GRIPS THE SOUTHLAND followed by stories of fender-benders on our roadways as local folks displayed their inability to properly maneuver automobiles during inclement conditions.

Street interviews ran the gamut of folks complaining about the wet, frigid conditions (where temps plummeted down into the upper 40s) to those relishing such conditions because they’re reminiscent of the holiday weather they recalled from childhoods in less tropical climes. 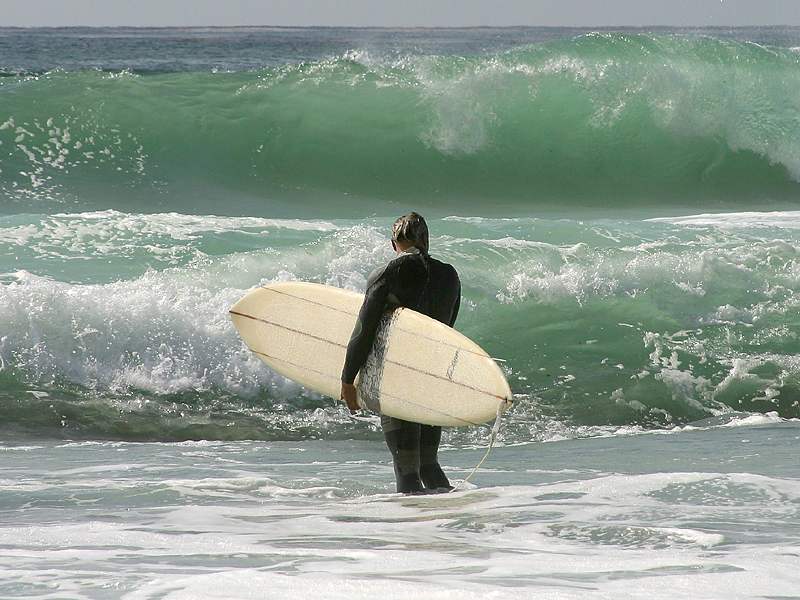 But even as blue skies returned to the area, it was surfers who seemed to appreciate the winter storm the most. The aftermath of the storm was like an early Christmas present from almighty God: TEN FOOT WAVES hitting our shores in glassy sets, offering long rides on long boards. Spotting these aquatic monoliths early one morning from my kitchen window while sipping a large mug of coffee quickly sent adrenaline into my system, purging sleepiness from my body. Grabbing my surfboard, heading out the door to the beach to catch a few for myself, I found myself on the sand gazing up at these H2O mountains. They looked even bigger from this perspective than they had from my window. 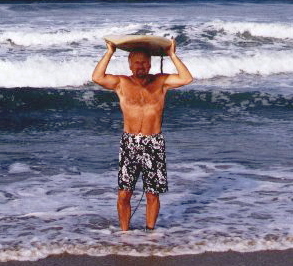 Properly wet-suited, I braved the frigid 52 degree water, paddled out, and caught one! Feeling the ocean pushing me up, being propelled atop incredibly fast-moving, glorious, liquid momentum, savoring the rush of it all, even while losing my footing and being whipped off my board, abruptly finding myself underwater, clawing toward the surface and gasping for air! Then rudely shoved back toward terra firma, the sandpaper-like shore ripping a few layers of epidermis from face and feet, I lumbered out of the water like some dazed, elderly walrus, tugging my leashed surfboard with me. Feeling chilled to the bone from head to toe, I sat on beach and collected myself. Then paddled out again for more.

Several rides and a couple of hours later, I’m sitting inside my nice warm house, in front of a roaring fireplace, sipping hot cocoa and looking out over the frothy, turbulent, blue ocean that has been my playground all morning. I feel absolutely awash in the same sort of afterglow that I recall from childhood post-present-opening on Christmas morning. Only, at this stage of life I realize the greatest present of the season is that of living to the ripe old age of fifty-something and still being able to surf the big waves of a California winter wonderland.

C. Julien says: December 13, 2006 at 9:20 am Wow! Your vivid descriptions of your mornings’ surf are so real, they almost make the snow in my front yard seem to disappear! Here on Lake Superior in Upper Michigan, we have but a few brave souls who also love to venture out on the cold Superior waves after such storms, and I count everyone of them among my friends! Thanks for the reminder of warmer days gone by….! CJ

C. Nisan says: December 13, 2006 at 11:05 pm Up here in cloudy, cold, rainy Toronto, Ontario, Canada, I can only read with wonder and amazement that anyone would brave such behemothic waves! Cudos to the undaunted boomer soul whom I admire. I personally shall sit in my land-bound townhouse remembering the vivid desciptions of this Christmas surfer, with whom I must agree in principle if not in action: to have such a rush, such joy, and such a peaceful glow is truly reminiscent of those wonderful childhood days when Christmas truly was magic. C.

Annie says: December 23, 2006 at 11:51 am Enjoyed this. Moondoggie is alive and well and still surfing the waves of California! Hooray!

Ardath Weaver says: January 7, 2007 at 1:32 pm At the ripe old age of fifty-something I can’t imagine having your endurance but I do remember the joys of hot cocoa in the winter – thanks for sharing the glow of a California Christmas with those of us stuck inland in the south without beach or snow!

The Retirement Guy says: January 29, 2007 at 9:49 am Just wanted you to know that as I write this today, we are entering what is known as an Alberta Clipper. Temperatures are expected to be in the single digits, with wind chills in the -’s. I feel incredibly jealous every time I read this blog.

The Retirement Guy says: January 29, 2007 at 9:51 am Just wanted to let you guys know what an Alberta Clipper is. Temperatures are expected to be in the single digits, with wind chills in the -’s.

Grab the boards and head for Mavericks

Rudy Chi says: December 21, 2007 at 4:01 pm If Ernest Hemmingway went surfing with you that day I think that is how he would have described it Mike. Well done!